On time and within the budget is what the elected officials in Breckenridge like to hear when they’re talking about one of the most important and expensive capital projects in town history.

And that’s how work on the new water treatment plant on the northern end of town at Highway 9 and Stan Miller Drive is progressing, said James Phelps, director of public works. Once complete, it will have the capacity to produce 3 million gallons of clean water daily.

Breckenridge officials broke ground on the $58 million water treatment plant in April 2018, a project that’s going to give the town the second source of water it sorely needs.

With that, he expects the new water treatment plant will be finished on time in the summer of 2020. 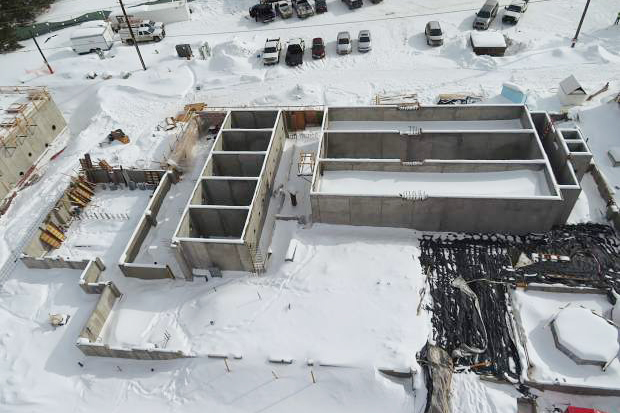 “The project is tracking on schedule,” Phelps said, adding that construction activities are happening across the site at the new plant’s administration, residuals and treatment buildings.

Work is ongoing at the raw water pump station as well, including the pump station and intake structure, while construction of the main building ­— the treatment building — is looking to go vertical in March.

The construction budget for the new water treatment plant came in at $42 million. So far, there have been five change orders for $38,000, Phelps said, adding that more are expected as the work continues but he doesn’t think they will run the plant over its total budget of $58 million, which includes design, construction and contingency costs.

As far as the town can tell, the new water treatment plant stands as the largest capital spend Breckenridge has ever made on a single project.

However, going without a second water plant could cost the town even more dearly in the event a wildfire or drought threatens Breckenridge’s only existing source of drinking water at the Gary Roberts Water Treatment Plant. While those fears exist, the town needs a backup now because of the Goose Pasture Tarn Dam.

The earthen dam built in 1965 sits near the Gary Roberts Water Treatment Plant and has an eroding spillway in need of repairs. State and local officials believe the dam will hold given mitigation efforts, but it’s a pressing need, nonetheless.

However, the dam work can’t begin until the town can turn off the old water plant, which it can’t do without depriving Breckenridge of its water supply until the new one is up and running.

Other concerns leading to the construction of the new water plant include having a redundancy of treatment capacity, maintaining operational flexibility and protecting the environmental health of the river.

With all the ongoing work at the new plant, Phelps wanted to highlight water pipeline work that will begin in late May, or as the weather allows, and should be complete by November.

It entails installing a water line from the main treatment building and connecting to an existing water line on Highlands Drive. The pipe will follow an alignment up Fairview Boulevard, and the finished line will go under Highway 9, utilizing a casing pipe that was previously installed.

The town will hold a second public meeting on April 10 for the Silver Shekel Neighborhood and has set up a project website specific to the finished water pipeline at TownOfBreckenridgeFWPL.com for updates once construction begins.

As for the giant crane that’s been hovering over Breckenridge while work at the water treatment plant continues, Phelps said it could be de-erected in late summer, possibly sometime in August.