Building a second water treatment plant might not be the most glamorous development in Breckenridge history, but it could be one of the most important.

Public officials ceremoniously broke ground on the town’s new water treatment plant Tuesday afternoon, signifying the beginning of a three-year process that, once complete, will address future water needs while giving the town a backup supply where one doesn’t currently exist.

“It’s the kind of thing that will probably go unsung in the community, but years from now, I think, we’ll all look back on this and realize what a wonderful opportunity it was for us to secure the future for the people who live here,” Breckenridge Mayor Eric Mamula told a small gathering decked out in hardhats and yellow vests at the construction site for Tuesday’s groundbreaking. 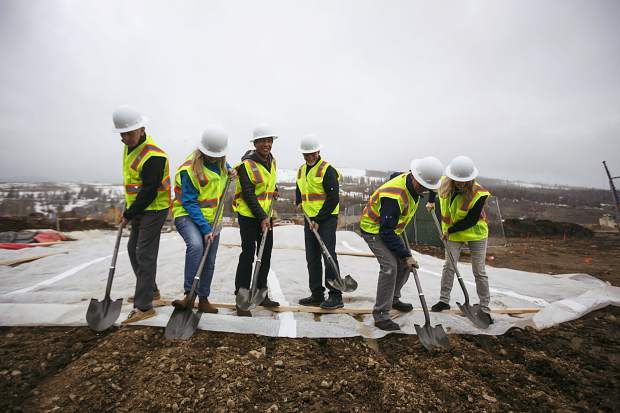 The new plant is going up on the northern end of town at Highway 9 and Stan Miller Drive. Once complete, it will have the capacity to produce 3 million gallons of clean water daily, according to James Phelps, director of public works.

“This project is essential to the community’s economy, natural environment and quality of life for the citizens of Breckenridge,” Phelps said.

But it’s not going to come cheap.

The town has allocated $50 million for construction of the second water treatment plant in the 2018 budget, and neither the price tag nor the importance of the moment was lost on the town mayor.

“This is the single biggest project, I think, we’ve ever done as a community, both in scope and cost,” Mamula told Tuesday’s crowd. “It’s a little nerve-racking, honestly, to be one of the people that’s standing up here pushing this, but it’s super critical. We can’t live at the end of the line like we do and not think that one day we’re going to have a problem at the other plant.”

As far as town staff can tell, Mamula was right: the North Water Treatment Plant, as it’s been named, stands as the largest capital spend Breckenridge has ever made on a single project to date.

However, those same officials also expect the new plant to be an invaluable resource for the next 50 years or longer, not only addressing critical needs related to future growth but by giving the town its much needed backup, which would be critical should something like a wildfire flare up by the Gary Roberts Water Treatment Plant and threaten the town’s existing water supply.

The existing supply could also be jeopardized by extreme drought conditions. In addition to fears of drought and wildfires, other concerns about having a redundancy of treatment capacity, maintaining operational flexibility and protecting the environmental health of the river have also come up since the project started really taking shape with a 2013 feasibility study.

Moltz Construction has already begun work on the second plant, and the town expects crews to wrap up in the summer of 2020.

The timeline is important because the Goose Pasture Tarn Dam, built in 1965, has an eroding spillway, and the town can’t start on those repairs in earnest until the Gary Roberts Water Treatment Plant, which is located next the dam, can be turned off. But that can’t happen without cutting off the town’s only water supply until the new plant is up and running.

The good news is local and state officials have both expressed supreme confidence the dam will hold given current mitigation efforts, like keeping the reservoir at below-normal levels.

During his remarks, Mamula also lauded previous town councils, for without their work, he said, Breckenridge wouldn’t have the water rights “to pull something like this off.”

“And the town of Breck is rich in water,” the mayor continued. “That’s the one thing I think that we outshine almost every other community in the region is with the water we own.”

One additional caveat related to construction of the second water treatment plant, the recreation path between Shores Lane and Gateway Drive has been closed and will remain so until late May. The path has been re-routed on the west portion of Highway 9, and the section is expected to reopen before Memorial Day Weekend.